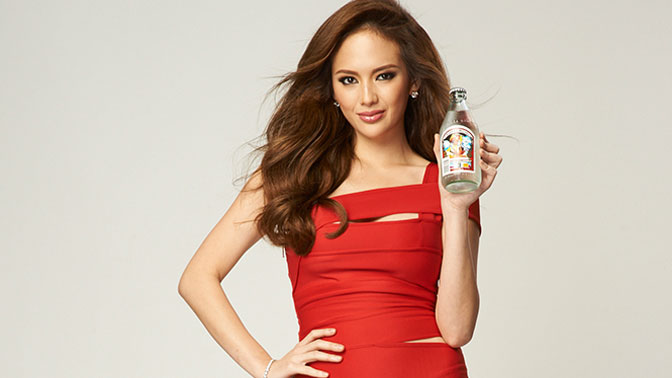 Ginebra San Miguel marks its 180th anniversary as it launches sexy actress Ellen Adarna as its official calendar girl for 2015.

Ellen Adarna recently concluded her starring role on ABS-CBN’s top-rating afternoon series Moon Of Desire and she is currently gearing up with a brand new series, also on ABS-CBN, titled Pasion de Amor. Ellen is also part of the ensemble cast of Skylight Films’ and Quantum Films’ current sexy comedy Beauty In A Bottle.

Being GSM’s newest calendar girl for 2015 is another milestone in Ellen’s career as she joins the ranks of the country’s most iconic and sexiest women who have posed for Ginebra San Miguel’s legendary and highly anticipated annual calendar. “I am very honored to be part of Ginebra San Miguel’s fabulous history,” says Ellen. “I feel confident and humbled at the same time for the trust that GSM gave me to be its 2015 calendar girl.”

GSMI vice president and Marketing manager Nelson Elises, on the other hand, reveals the reason why they choose Ellen as the brand’s 2015 calendar girl. “Ellen Adarna is arguably the hottest and sexiest young actress in the industry today. She has a very strong and loyal fan base and we are very proud to welcome her on board as our 2015 calendar girl.”

With photography by BJ Pascual, make-up by Albert Kurinawan, and styling by Liz Uy, Ellen was shot against the backdrops of a rice field, a construction site, and the beach to honor and represent farmers, construction workers, and fishermen. GSMI will honor working class Filipino men as represented by farmer Dick Alipio Evasco from Atok, Benguet; construction worker Alfredo “Ada” Abastas from Metro Manila; and fisherman Mosies Mesa from Binangonan, Rizal. These men were each given plaques of recognition, a special Ginebra San Miguel Ganado Packages, GSMI products, and a P10,000 cash prize on the day of Ellen Adarna’s grand press launch.

The brand also mounted a Ginebra San Miguel 180 Travelling Exhibit that has been going around the country since its launch earlier this year. This is Ginebra San Miguel’s way of showing its appreciation for the patronage and support of millions of Filipinos for the past 180 years, and for keeping the brand the number 1 selling gin in the world. The travelling exhibit features the brand’s past calendar girls which include Anjanette Abayari (1994), Alma Concepcion (1995), Michelle Aldana (1998), Janna Victoria (1999), Patricia Javier (2000), Geneva Cruz (2001), Rica Peralejo (2002), Aubrey Miles (2003), Belinda Bright and Maricar De Mesa (2004), Angelica Panganiban (2007), Marian Rivera (2009 and 2014), Anne Curtis (2011), Solenn Heusaff (2012), and Georgina Wilson (2013).