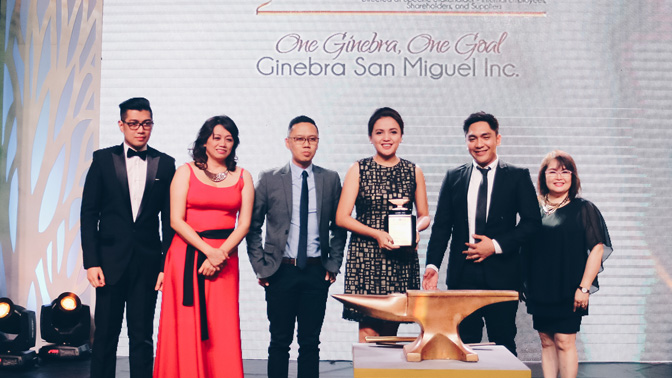 The Public Relations Society of the Philippines (PRSP) presented GSMI a Gold Anvil Award for its communications campaign “One Ginebra One Goal” as the Best Public Relations Program directed at specific stakeholders, internal employees, shareholders and suppliers.

The “One Ginebra One Goal” communications campaign was launched last year, which showcased Ginebra San Miguel’s culture of teamwork and “never-say-die spirit” — engaging employees, brand ambassadors and the basketball team as one barangay to support the one goal of the hard liquor giant. The campaign also resonated to basketball fans with #WeAreOneGinebra becoming a top trending topic on Twitter during the PBA Governors’ Cup Finals where Barangay Ginebra San Miguel won its first championship after an eight-year title drought.

GSMI’s “One Ginebra One Goal” campaign is the company’s lone entry to the 52nd Anvil Awards and also its first win.

The annual Anvil Awards, organized by the PRSP, is the most coveted prize in the public relations industry, which recognizes the best programs and tools that meet the highest PR standards.