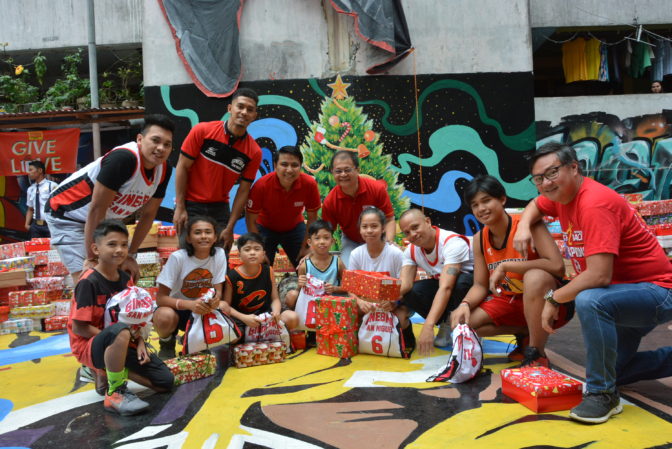 Big gestures can come in small packages, or in this case, in shoeboxes.

A thousand shoeboxes filled with various gift items were turned over by the employees of Ginebra San Miguel Inc. (GSMI) to the residents of Fort Bonifacio Tenement Building in Taguig City recently.

“Give Love: Ginebra San Miguel Shoebox Project” benefitted over 700 families living in the 7-storey housing project built in the 1960s. Shoeboxes were likewise distributed to beneficiaries in Barangay Subangdaku in Mandaue City, Cebu and Sitio Kulafu in Davao City.

In addition to gift boxes, GSMI also provided jersey uniforms to around 90 kids who participated in the basketball picnic games in Taguig Tenement initiated by Mr. Pinoy Hoops Mike Swift, a sports advocate who grew up in Brooklyn, New York, a place known for its street basketball culture. Swift now considers Tenement his second home.

Back in 2014, Swift promised to help the Tenement community and to make basketball and the arts as their common advocacy.

“Sports definitely changed the complexion of tenement. Basketball changed their lives. It took a lot of kids off the streets and it gave them another outlet. I think this shoebox project with Ginebra will be a long-lasting memory for them, especially that this place is filled with Ginebra fans, and the attitude of the people of tenement is never say die,” says Swift.

The gift giving activity was also highlighted by the unveiling of a mural painting of the basketball court featuring images of international basketball legends and the battle cry of Barangay Ginebra San Miguel Gin Kings “never say die”. Ginebra players Scottie Thompson and Paolo Taha were also on hand to distribute gift boxes to the kids.

“Ginebra has a very strong basketball passion. Each time Barangay Ginebra plays basketball, win or lose, we do it for the fans. We do it for our communities. We do it for every Filipino who says never say die,” says GSMI marketing manager Ron Molina.

GSMI is a subsidiary of San Miguel Corporation.