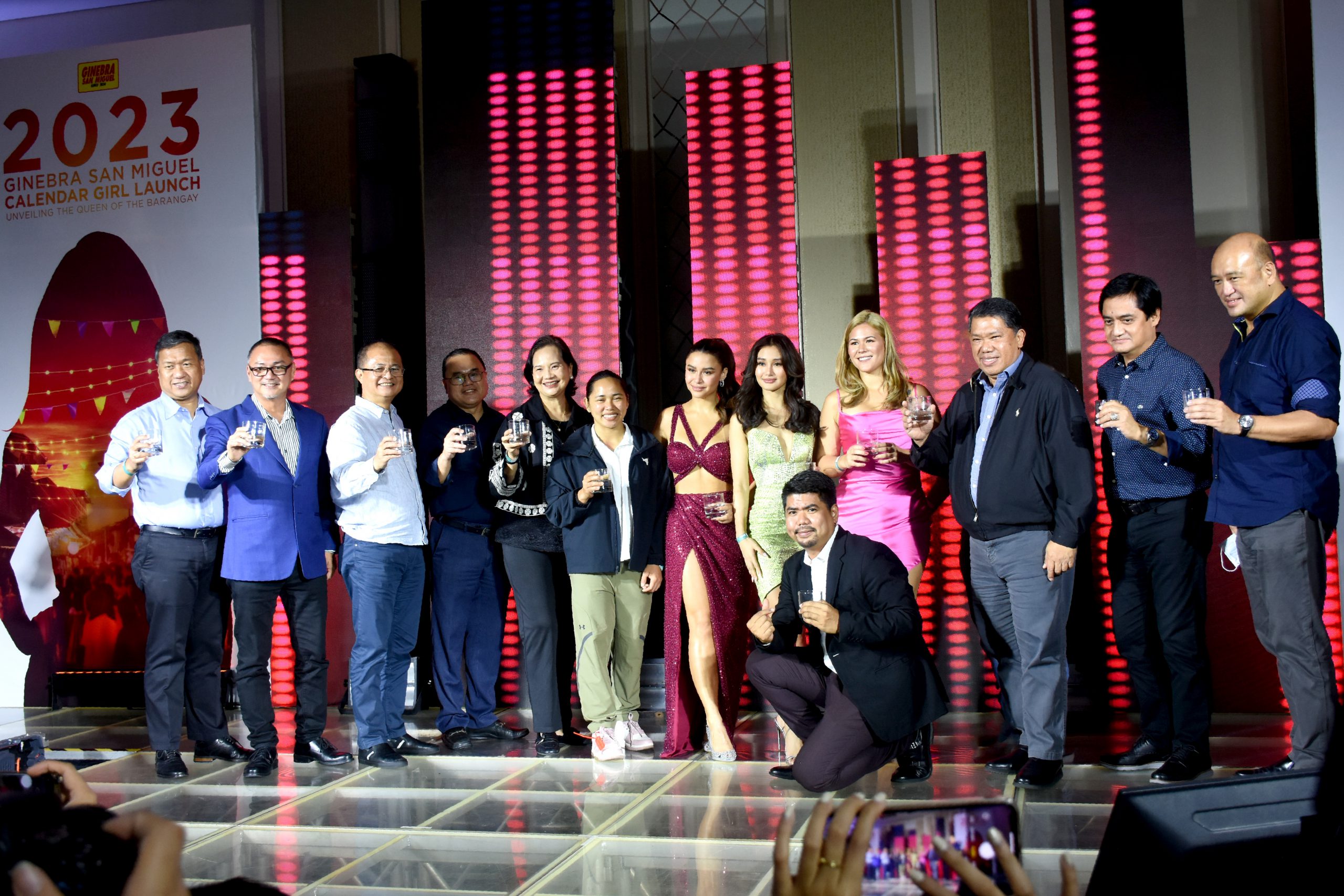 Yassi was surprised and honored when she got a call that she was chosen to be the newest member of the GSMI family. “Being a part of such a great legacy is something that is going to be a milestone in my life,” says Yassi. “It’s really something special to be part of a company that serves world-class quality products, and it means a lot to me that they chose me to be a part of the brand,” she continued.

It was the first time again, after two years, that the event was held face-to-face. “We are excited to finally hold our Ginebra San Miguel 2023 Calendar Girl launch live again! For us, this launch also signals the atmosphere for next year. The pandemic has affected many Filipinos, but now is the time to recover—armed with Bagong Tapang, to dream and hope again, and to spread that positivity to others,” says Marketing Manager Ron Molina.

With the theme “Queen of the Barangay,” the calendar features Yassi as a modern Filipina that is able to adjust to the new normal with positivity and productivity through her “matapang,” “ganado,” and “never-say-die” attitude. 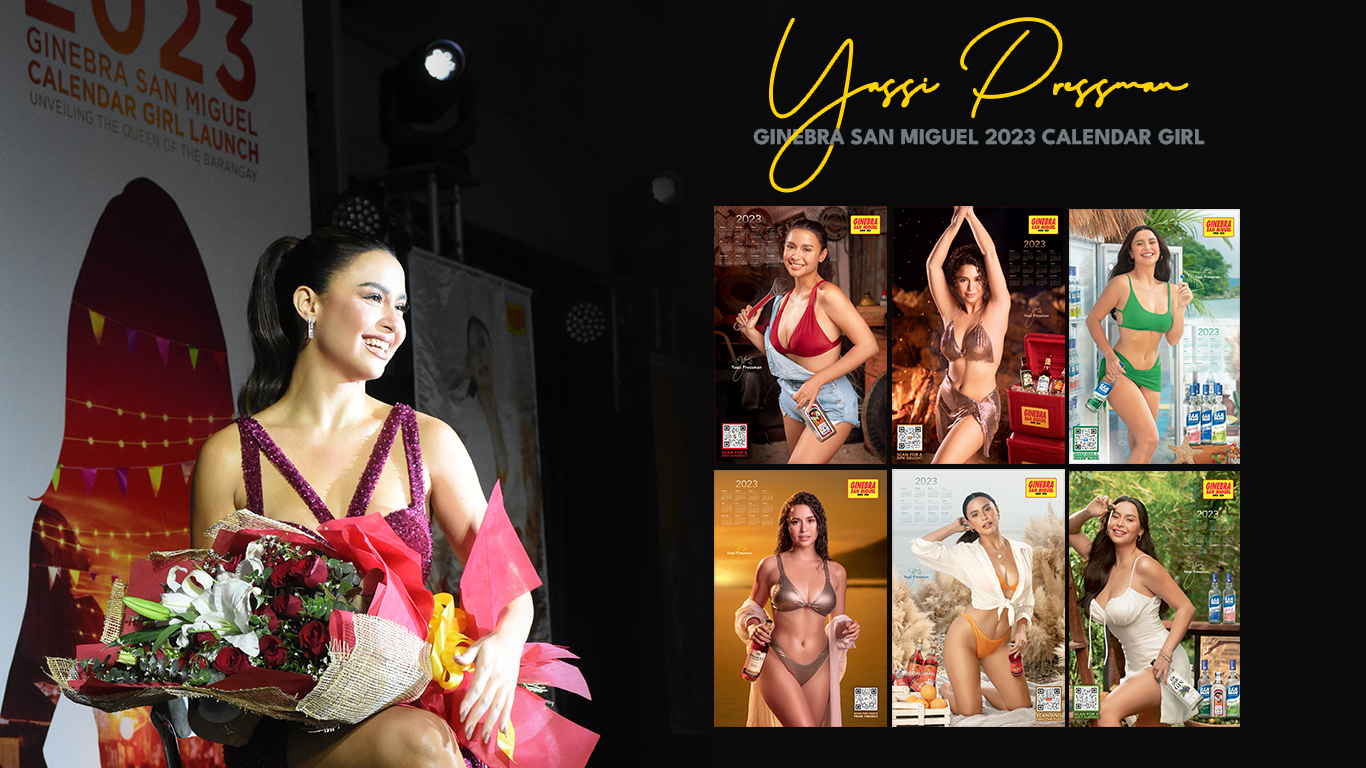 YASSI AS “QUEEN OF THE BARANGAY”

Yassi prepared herself physically and mentally to be the best representation of what an ideal Ginebra calendar girl should be. She admits that prior to her selection, she was always trying to keep herself fit. “Of course, there were times that I also had to give in to my cravings, but at the end of the day, I knew my priority was to be stronger, healthier, and happier.”

Preparing for the calendar shoot, Yassi pushed herself to do weight training, boxing, and having a healthy diet. “My fitness journey helped me become a better version of myself.” As for her mental preparation, she just kept in mind Ginebra’s taglines like “Ganado sa Buhay,” and “Never-Say-Die.”

With Yassi’s positivity and optimism in life, her personality shined through the six layouts of the Ginebra San Miguel 2023 calendar. The photo shoot was also done on location after two years, reflecting the relaxed and open atmosphere we anticipate in the coming year.

The six layouts are inspired by different cocktail mixes. The first one is “Ginsu Mix” set in an auto repair shop, reminding the importance of hard work and passion in everything we do. The second layout is “Calamansi Surprise,” showing Yassi amidst greenery and nature.

“Kula-Orange Fizz” is the third layout, featuring a background filled with dried pampas grass with wooden trays where one can display spirits and mix cocktails. According to Yassi, she could relate to this design as she had her dream home renovated recently, which now features a lot of touches of brown wood furniture and neutral shades. “I also have a mini bar in my living room–an open space to bond with my family and friends.”

The fourth layout is the “Velocity Mix,” something that seems like it’s from a blockbuster summer movie complete with a ref full of Ginebra products. While “Sky Prisma” is the fifth layout, also in a beach setting, but this time with a picturesque sunset in the background. Last is the “Mango Daiquiri,” where Yassi is magnified by a bonfire by the beach, the best place to experience Ginebra’s creative cocktails and concoctions. Just don’t forget your coolers and ice boxes for that perfect night!

Personally, it was hard for Yassi to choose a favorite among the six calendar layouts, but she has a bias toward the “Velocity Mix.” “It’s because I always enjoy beach time with family and friends–a ‘ginstronomic’ trip with our favorite food and gin. The drink also has candies and gummies–the perfect combo for me, as it is sweetness with a kick!”

YASSI ON BEING A MODERN FILIPINA

During the pandemic, the actress and entrepreneur has gained new discoveries about herself–a new purpose, pride, and passion that resonates not only with her family but the whole barangay.

As an empowered Filipina woman, Yassi owns multiple businesses, knows how to tend to her organic garden, fixes things at home, and concocts rejuvenating drinks for herself and her family—all while fulfilling her commitments in the entertainment industry.

With her self-discovery, Yassi also realized to be kinder to herself and has become the “matapang” woman she is by refusing to let difficult circumstances pull her down. “When I was younger, my father always advised me to keep trying because, as he said—if you try and try and you succeed, you’re going to be happy, but if you try and try and you fail, I’ll be there to catch you,” says Yassi. Her family, the source of her “tapang,” made her fearless in the face of whatever trials or tribulations she may face.

Despite her personal struggles, Yassi continues to hone the talents that she already has and allows her inner beauty to radiate, too, in order to inspire others. According to her, she shows her most natural self online and sometimes even reveals some not-so-glamorous side of a celebrity because she believes that it would be healthy for people, especially the youth, to see that genuine side of her.

“I am open to everybody [on social media] about my battles and journey toward being healthier and stronger,” says the 2023 Ginebra calendar girl. “Whenever I get messages from little girls or any netizen saying that I inspire them to dance, act, and to keep moving forward, it gives me the ‘ganado’ feeling and hope and aspiration to empower more women!”

If there are things that the pandemic or the recent months have made women realize, it’s that they can accomplish things that are not expected from them and deliver more than the ordinary. “I think Ginebra San Miguel chose me because I embody courage, passion, and its never-say-die spirit. Growing up in showbusiness, you’d experience a lot of rejections and comments from people, and while we know we should just brush them off—especially the non-constructive criticisms—they sometimes get to you,” adds Yassi.

But amid all these rejections and disappointments in the past, Yassi just soldiered on, keeping a “never say die” attitude. Eventually, she became unstoppable, brimming with positivity and personality, allowing her to rise above the crowd.

As “Queen of the Barangay,” Yassi and her friends know how to have a good time—with good music and drinks, as seen on her social media posts. “We love theme parties; the last one we did was about sunflowers. We also did disco and Coachella.”

The new brand ambassador also shared that her favorite gin drink is the GSM Blue Mojito because of its light taste and her friends can easily enjoy the drink by just simply putting ice or adding any fruits like pineapple for a fruity flavor.

As GSM’s newest brand ambassador, Yassi hopes to spread positivity and continue to inspire and empower women and the youth—sharing the “ganado” spirit with her 28 million followers on social media.

The Ginebra San Miguel Calendar Girl is a long-held tradition in GSMI and an important part of the brand’s history. Since its inception in 1988, beauty queens, actresses, and models who have made their mark in their respective fields have graced the Ginebra San Miguel calendar. Among them were Marian Rivera (2009 and 2014), Anne Curtis (2011), Solenn Heusaff (2012), Miss Universe 2015 Pia Wurtzbach (2019), Sanya Lopez (2020), and Chie Filomeno (2022).