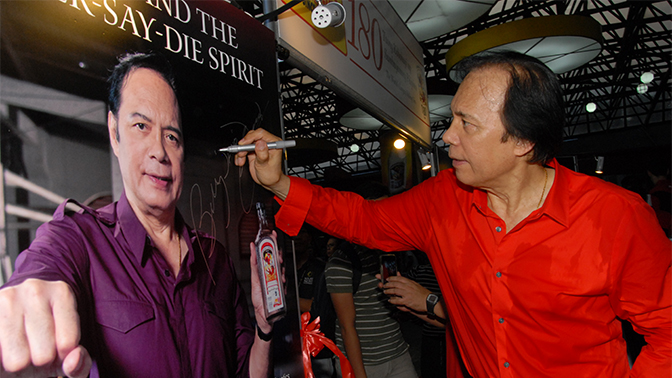 ROBERT JAWORSKI, the ‘Father of the Never-Say-Die’ spirit signs his photo during the launch of the Ginebra travelling exhibit.

Throughout its 180-year history, generations of Filipinos have embraced Ginebra San Miguel as a Filipino tradition.

The travelling exhibit kicked off with its first stop at the San Miguel Corporation headquarters with no less than The Living Legend Sen. Robert “Sonny” Jaworski leading the ribbon cutting ceremony, with GSMI president Bernard D. Marquez and the Barangay Ginebra San Miguel Gin Kings.

Part of the continuing celebration of Ginebra San Miguel’s 180th anniversary, the travelling exhibit will next tour to selected malls where there will be various activities, including games and a meet-and-greet with the Gin Kings.

“Ginebra San Miguel has been an integral part of every celebration since 1834 until today. This exhibit is a token of our appreciation for every Filipino who shared their history with us,” says Marquez.

The travelling exhibit chronicles Ginebra San Miguel’s humble beginnings from its birth as a family-owned distillery in Quiapo, Manila on March 10, 1834. Aside from historical facts and trivia, the exhibit also shows the evolution of its bottles from the narrow-necked glass blown containers called the damajuana to the now iconic round bottle or Bilog, the story behind the St. Michael Archangel bottle label drawn by the first National Artist Fernando Amorsolo, its memorable TV and print advertising campaigns, and its most popular calendar girls.

Panels were also dedicated to Jaworski, the father of the never-say-die-spirit, and the current roster of the Barangay Ginebra San Miguel Gin Kings, one of the most popular teams in Philippine basketball history.

Meanwhile, a limited edition 180th anniversary commemorative booklet and a special commemorative bottle will be launched later in the year. There will also be various raffle promos and a corporate social responsibility program where 180 beneficiaries will be given scholarships and livelihood opportunities.