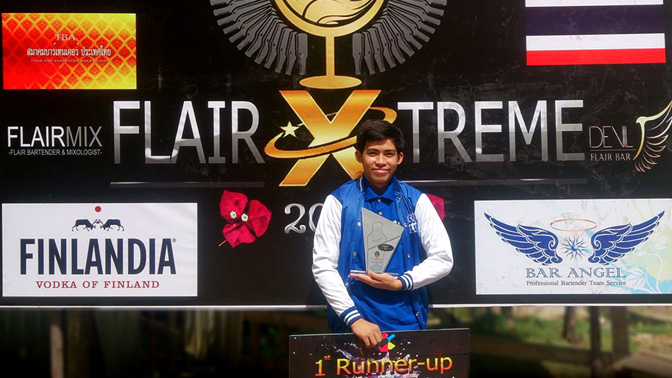 Caballes, also the reigning flairtending champion of GSM Blueniversity, the longest-running and most prestigious flairtending tilt in the Philippines, was the lone Filipino representative in the regional tilt.

He wowed judges and audiences by showcasing his mastery of flairtending moves such as the backflip, the bottle stall, the tomahawk swipe thru, the elbow bump, shadow pass and snake arms, among others.

Before representing the Philippines in the contest, the Hotel Management student from the Lyceum of the Philippines University was already winning recognition at various local bar flairtending competitions.

Caballes then went through extensive training under the GSM Blueniversity program of Ginebra San Miguel Inc., which aims to enhance the skills of students and develop the potential of flairtending talents across the country.

Earlier this year, he bested 50 other candidates and was named GSM BlueniversityFlairtending champion for 2016.

GSM Blue brand manager Winchie Tobias explains that an increasing number of Hotel and Restaurant Management (HRM) students are getting into bar flairtending as it has now become a sought-after talent among bar and restaurant owners.

“Nowadays, bar flairtending is more than just a creative display of skill in drink mixing and throwing bar tools up in the air. It has evolved into a performance art, enhancing guests’ overall experience in bars and restaurants,” he says.

Since its launch in 2008, GSM Blueniversity has served as a platform for HRM students as well as bar flairtending enthusiasts to enhance their skills to meet global standards and promote awareness on responsible drinking.

GSM Blue Distilled Spirit is a quality product of GSMI, producer of the world’s no. 1 selling gin, Ginebra San Miguel. For the latest updates on GSM Blueniversity, check out GSM Blue’s official Facebook fanpage www.facebook.com/gsmbluegin or log on to https://www.ginebrasanmiguel.com.