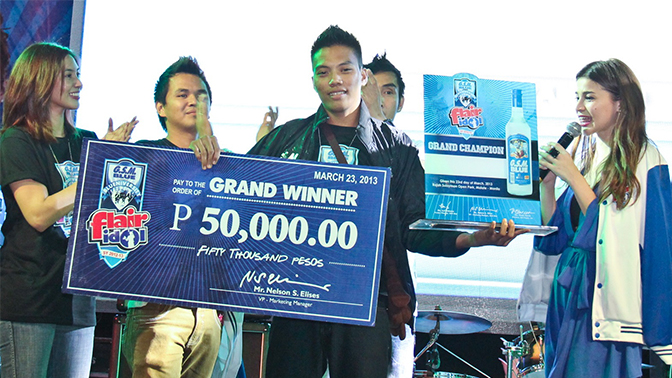 After a series of auditions held all over the country, 20-year-old Hotel and Restaurant Management (HRM) student Jonathan Villarma from VMA College, Bacolod City bagged the much-coveted title of G.S.M. Blue Flair Idol 2013 at the grand finals held at the Rajah Sulayman Open Park in Malate, Manila.

His impressive flairtending moves and unique G.S.M. Blue based concoctions, stood out from among the 16 other finalists. G.S.M. Blue brand ambassador, actress Anne Curtis, awarded to Villarma his cash prize of P50,000, product support from G.S.M. Blue, and a bar showcase worth P30,000 for his school.

An estimated crowd of 5,000 who witnessed the event were also treated to rockin’ performances by Ginebra’s band ambassadors Callalily, Itchyworms and Rocksteddy, while Anne Curtis entertained the crowd with her renditions of current pop hits.

Since its launch in 2007, G.S.M. Blue Flair Idol contest has become a much-awaited event among HRM students as well as flairtending enthusiasts, which also serves as a platform to enhance their bartending skills to the global standards.