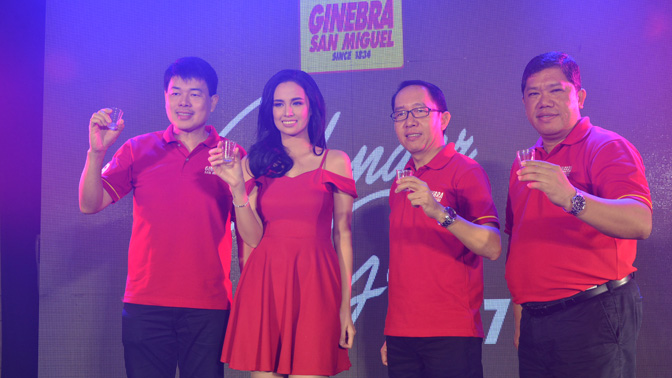 Kim shared that it has always been her dream to be an actress, and now that she is part of Ginebra San Miguel’s prestigious roster of brand ambassadors, she hopes that this will open up more opportunities to let her talent shine.

“Kim definitely personifies our marketing campaign, ‘Ganado Sa Buhay’. She worked her way up to become one of the most recognizable faces in the entertainment industry today. Her story is an inspiration to every hardworking Filipino,” Ginebra San Miguel Brand manager Paolo Tupaz said.

“Even when I was younger, I already had specific goals in life; I knew what I wanted to be and what I wanted to accomplish. Being an only child, I also learned to be strong and independent early on. I’m very grateful that my hard work and perseverance are starting to bear fruit now. So for our ka-barangays, I just want to send a message that if we remain strong, focused and ‘Ganado sa Buhay’, we will be able to achieve our goals and dreams,” Kim said.

Kim started her showbiz journey when she joined Eat Bulaga’s “Little Miss Philippines”. Since then, she has joined several other talent reality competitions and landed modeling gigs. She rose to fame with her viral videos on YouTube, lip-syncing “Twerk It Like Miley” and dancing to the “Trumpets” challenge, which got almost two million views.

More than just a pretty face, the fast-rising star is also a girl of many talents. Aside from hosting, dancing, and throwing punch lines in the top-rating gag show “Bubble Gang”, Kim is also a recording artist, having just released her debut single, “Know Me”, under GMA Records.

GSMI has released five layouts for its 2017 calendar with a “Cheeky and Geeky” theme, showing Kim’s fun and quirky side.

GSMI is a subsidiary of San Miguel Corporation.