THE GIRL WITH THE JAWORSKI TATTOO 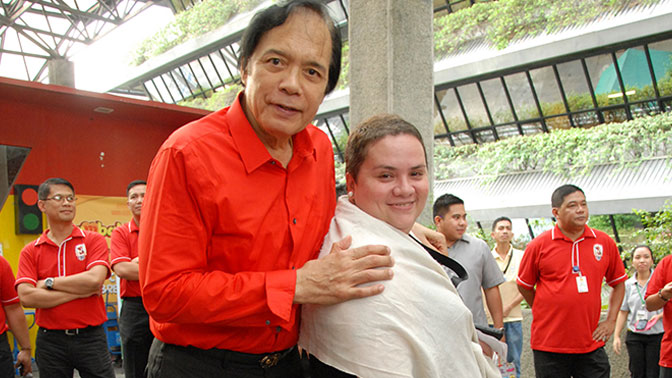 In victory, and even in defeat, Barangay Ginebra San Miguel Gin Kings draws its strength not only from its talented roster of players, but mostly from the die-hard fans who proudly don the colors of the team, watch every single game with lively cheers of “GI-NE–BRA”, and waving posters bannered with their battle cry – “never say die”. The battle cry has become synonymous with the name Robert “Sonny” Jaworski and his former PBA team, Ginebra San Miguel. Mercado.

Of the team’s millions of faithful followers, one probably stands out from the rest as a certified, die-hard Ginebra San Miguel fan. And why not, when she had the face of The Living Legend of Philippine basketball and former playing-coach of Ginebra San Miguel, Senator Jaworski, tattooed on her right leg.

Edna is such a huge fan that she left work a little earlier than usual just to be at the launch of Ginebra San Miguel’s 180th Anniversary Travelling Exhibit where Jawo and the rest of the Gin Kings were special guests. She did not only get the chance to meet her idols face-to-face, but also show off her tattoo to Jawo himself. She was so overwhelmed by the moment that she cried when the Big J acknowledged her ink art.

Edna admits she easily gets emotional on about anything Ginebra San Miguel, most especially about her idol, or “coach”, as she fondly calls Jawo, admitting that both the team and the brand have had a deep influence in her life.

“Other than my father, I consider Jaworski my ultimate idol. Even if he doesn’t play anymore, he will forever be in my heart,” says Padiernos. Adding that what she likes most about her idols, they sincerely appreciate their fans and make it a point to spend time with them.

Just recently, as a way of thanking millions of kabarangay for their unwavering patronage and for making Ginebra San Miguel the world’s largest selling gin, Ginebra brought its Travelling Exhibit around malls in Metro Manila with the Gin Kings, in celebration of its 180th anniversary. As expected, every mall stop was packed with fans.

The basketball team, being very much part of Ginebra San Miguel history, is also featured in the exhibit along with historical facts and trivia about Ginebra’s beginnings in Quiapo, Manila, the evolution of its bottles and the bottle label by National Artist Fernando Amorsolo, among others.

Only the few and the proud loyal kabarangay fans will ever understand the “GinebraMagic”. Edna Padiernos is one of them whose admiration for the Gin Kings and the Living Legend translates to her passion for life and never-say-die spirit.