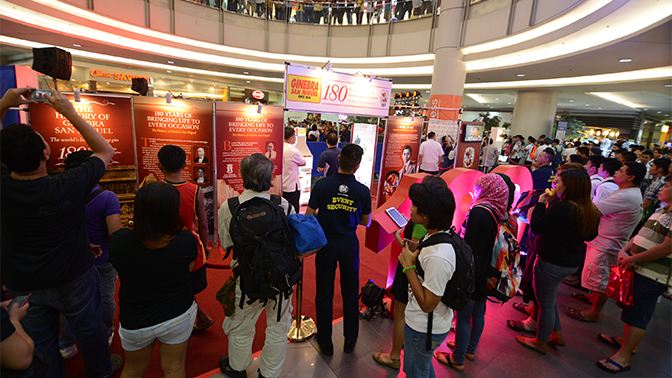 It is a common sight in rural areas, even in the cities, usually in parking garages, friends sitting around in a group exchanging jokes and life stories over a drink. Those who happen to chance upon a drinking clique will almost always get invited with “‘Pare, tagay!”, an invitation to join even for just one swig. And if one is to agree with local belief, you should never refuse an invitation for a “tagay”. Of course, when there is “tagayan”, there is “pulutan”.

“Tagay” is a Filipino drinking culture that symbolizes camaraderie, friendship, togetherness and unity, a culture that the country’s oldest and most trusted gin brand, Ginebra San Miguel, has cultivated for the past nine generations.

For Filipinos, drinks are meant to be shared, and to be enjoyed with friends. Very rarely that one finds a Pinoy drinking alone. One glass is used by everyone, and in the spirit of sharing and equality, the “tanggero” is responsible for giving everyone a fair share of the drink.

As Ginebra San Miguel marks its 180th anniversary, the no. 1 selling gin in the world captured the drinking culture of “tagay” and its treasured relationship with the Filipinos in a one-of-a-kind travelling exhibit.

The Ginebra San Miguel 180th Anniversary Travelling Exhibit features several elements that make up what Ginebra San Miguel is today—from its humble beginnings on March 10, 1834 as a family-owned distillery in Quiapo, Manila, to its fascinating bottle history and the story behind the St. Michael Archangel bottle label by the first National Artist Fernando Amorsolo, its most memorable TV and print advertising campaigns, and the sought-after Ginebra calendar girls.

The love of Filipinos for basketball also did not go unnoticed. Ginebra San Miguel further strengthened its hold of the market not only as a provider of drinks but also a patron of sports. An exhibit space was dedicated to “The Living Legend” and the father of the “never-say-die-spirit” Robert Jaworski, Sr., plus the current roster of the Barangay Ginebra San Miguel Gin Kings, the most popular team in the Philippine Basketball Association (PBA).

After touring selected malls in Metro Manila with the basketball team, the travelling exhibit will then make stops in neighboring cities and provinces. This is Ginebra San Miguel’s way of showing its appreciation for the continued patronage and support of millions of Filipinos and for keeping the brand the no. 1 gin in the world.

Ginebra San Miguel’s 180-year history is not just about a liquor brand. It is also a history of the Filipino drinking culture that will continue on for the next 180 years.

For updates, visit www.ginebrasanmiguel.com or like the official fanpage of Ginebra San Miguel www.facebook.com/barangayginebra.